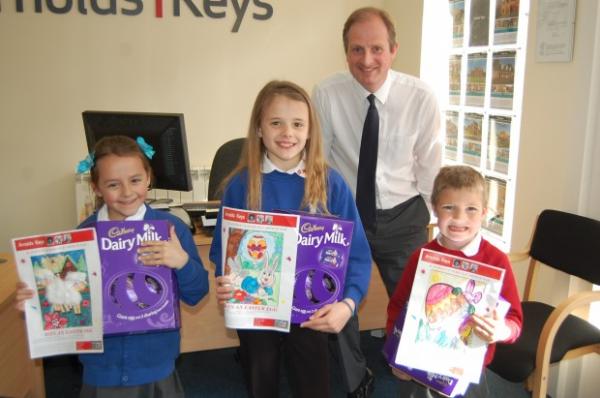 Three youngsters were able to tuck into an extra Easter Egg after they won a colouring competition held by local estate agent Arnolds Keys.  Calib Bayliss, Scarlet Beauchamp and Aliyah Webb were among 75 children aged between four and 11 from North Walsham’s nursery, infant and junior schools who entered the competition, and they visited the agent’s Market Square branch to collect their eggs from manager Mason Burrell.

“We were delighted to receive so many entries, and we hope we brought a bit of extra Easter cheer to North Walsham’s youngsters,” said Mr Burrell.  “As well as the Easter Eggs, the winners’ pictures have been displayed in our front office, which has brightened it up for both our staff and customers.”

The latest dragon taking part in the GoGoDragons! event in Norwich is to be unveiled at Norwich Castle – and it is set to take the artistic world by storm. Read more >