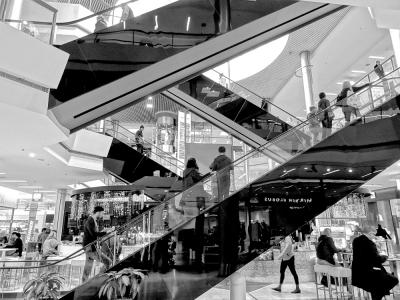 The restructuring of our High Streets continues apace, but at least this month there is some positive news: although many suppliers have taken substantial financial hits, House of Fraser will not now disappear from the retail scene, after retail entrepreneur Mike Ashley stepped in to buy the troubled store chain out of administration.

We shouldn’t kid ourselves about the importance of this deal for the retail property market.  The House of Fraser estate totals some 7.7 million square foot, and Ashley immediately said that he would review existing plans to close nearly half of the brand’s stores.

The first result of this review was announced last week when it emerged that HoF’s flagship Oxford Street store will not now close after all.  It’s pretty clear that the strong-negotiating Ashley has driven a hard bargain with the landlord there, but in fact the deal is a win:win, because if the store had closed as planned, the building would have required significant redevelopment to make it viable as an investment.

I have written before about how the High Street is becoming shorter, and that therefore prime location is an important factor when assessing investment potential.  But as we see from the HoF Oxford Street situation, having a prime location is not the be-all and end-all: investors are increasingly having to engage with their tenants to ensure that both sides can make a sustainable return.

This is a big change from the days when owners of prime retail freeholds could simply sit back and collect the rent, safe in the knowledge that if one occupier disappeared, another would soon be along to take the space.  Retail property investment nowadays requires a more proactive approach, and, just as crucially, a collaborative one with tenants.

Investors in the retail property market increasingly need to understand how the market is changing, and that new players such as Ashley, and Philip Day of The Edinburgh Woollen Mill Group, are emerging while former retail power brokers like Philip Green fade from prominence.

This new breed of retail entrepreneur expects landlords to engage with them, and to play their part in making their businesses successful.  Investors shouldn’t balk at this – it’s a perfectly reasonable approach to finding common benefit in a market which is rapidly changing and facing a range of new pressures.

Of course, not every investor will deal with as important a retail entrepreneur as Mike Ashley.  But his approach is bound to trickle down to the smaller-scale situation, and both smaller retailers and more modest investors would do well to learn from the collaborative approach which seems to be keeping more House of Fraser stores open, benefiting customers, staff and High Streets around the country – as well, in the long-term, as landlords who might otherwise be faced with the headache of finding new retail tenants or else spending money in redeveloping their buildings for other uses.

THINKING ABOUT THE ‘C’ WORD

With the sun still shining and the kids still on holiday, I hesitate to mention this, but we need to talk about Christmas (sorry). Read more >

As interest rates start to creep up, attention will increasingly be focussed on the returns to be made from various types of investment – and some commentators have questioned whether... Read more >