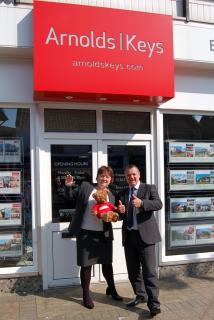 Two of our staff are set to jump out a plane later this month – all to raise money for charity.

Louise Hillman, Manager of Keys Holidays, and Allan Saunders, Residential Manager at Arnolds Keys’ office in the town, are joining forces to take part in a skydive to mark the 70th anniversary of Age UK Norfolk, which is our nominated charity for 2017.

The daredevil pair will leap out of a plane flying about two miles over Ellough airfield near Beccles on Sunday 20 August, strapped to experienced parachutists, freefalling at speeds of up to 120mph for 5,000 feet in about 40 seconds, before gliding serenely back to earth by parachute.

“It’s a big challenge for both of us, but we wanted to do something amazing to raise money for our charity of the year,” explained Louise Hillman.  “We are aiming to raise £1,000 through sponsorship and donations for this great cause.”

Anyone wishing to sponsor the pair can do so by visiting their justgiving page or by popping into Arnolds Keys’ Sheringham office on Station Road in the town.

A STRONG INDICATOR FOR OPTIMISM

We keep hearing mixed messages about the performance of the economy, with inflation unexpectedly down this month, talk of uncertainty over Brexit hitting business confidence, and consumer spending slowing –... Read more >

A Boom in City Living

Lots of us have a romantic notion of what we want our home to look like. Read more >

One of Lowestoft’s biggest industrial sites has been brought back into use following a deal brokered by our Commercial Department. Read more >

We are delighted to announce that we have appointed two surveyors in our commercial and agricultural divisions to meet growing demand for its services. Read more >