About Us | Blog | News of Michael Gove set to be the new Housing Minister has mixed reception in the housing sector.
Tweets by @ArnoldsKeys

News of Michael Gove set to be the new Housing Minister has mixed reception in the housing sector.

The news that Michael Gove is to be the new Housing Minister following Boris Johnson’s reshuffle has had a mixed reception in the housing sector. 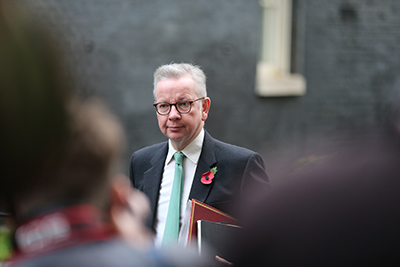 Gove is a difficult politician to warm to.  Charisma, empathy, the popular touch… these are all things for which he was clearly towards the back of the queue when they were being doled out.  His name has become a byword for the kind of cold, detached stereotypical political figure which has resulted in a massive disengagement from politics in the wider population.

That said, he is a survivor, and certainly not the Oxbridge duffer that many make him out to be.  Behind that Spitting Image style visage is a formidable thinker, an astute manoeuvrer, and someone who actually has quite a good track record of delivering policy from various ministerial positions. In short, he makes stuff happen.

It is no coincidence that Boris Johnson has handed him the housing brief at this critical electoral juncture.  The shock waves from the Amersham by-election – at which the Lib Dems used the Tories’ proposed planning changes as a lever to overturn a safe majority – has propelled housing to near the top of the political agenda.

Those planning proposals will be the making or breaking of the new housing minister.  Either Gove will redouble efforts to drive them through, despite an increasingly sceptical Tory backbench, or he will use his astute brain to water them down in a way which will be more electorally acceptable.

What happens, and how Gove implements it, will be crucial for the housing market.  There is no end in sight to the critical shortage of housing supply, and only an accelerated programme of new-builds can solve that crisis.  Planning, and local objections to development, is the barrier to making that happen.  Somehow Gove has to square the circle of driving thorough more construction while keeping Home Counties Tory voters sweet.  It’s a tricky task, but love him or loathe him, Gove is probably a good choice from the Prime Minister’s point of view to make it happen.

Housing is set to be higher up the political agenda in the next few years.  For all our sakes, let’s hope the new minister can work out a way of breaking the supply logjam, otherwise the market will remain unbalanced for the foreseeable future.

One of the most interesting collections of farmer-owned vintage tractors and farm machinery in the country will be going under the hammer in Norfolk later this month, when the collection... Read more >

The future of an iconic historic Norwich building has been secured with the news that the tenancy of the Briton’s Arms on Elm Hill in the city is to be... Read more >