The future of an iconic historic Norwich building has been secured with the news that the tenancy of the Briton’s Arms on Elm Hill in the city is to be taken over by a Norwich chef. 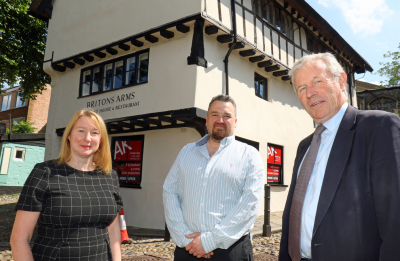 Richard Ellis, who has worked in some of the county’s leading kitchens including the Ship at Brancaster and the Wells Crab House, has been announced as the winner of a competition to find a new tenant for the landmark building, following the retirement of two sisters who ran a well-known coffee shop and restaurant in the building for 44 years.

Mr Ellis hopes to reopen the Briton’s Arms in September, and is promising to retain the winning formula which has made the restaurant such a popular fixture for the last four decades.

“The Briton’s Arms is part of the city’s fabric, and I will be looking to build on the fantastic business which was run from the building previously,” he said.  “I’m looking forward to living in a whirl of cake and eclairs!”

Mr Ellis plans to open for breakfast and throughout the day, with plans to offer pre-theatre suppers in the longer term.  “It will be a question of evolution not wholesale change,” he promised.

The chef, who has lived in Norfolk since he was ten days old, will be moving into a flat on the upper floors of the historic thatched building, which has featured in many feature films and TV dramas.

The competition to find a new tenant for the Briton’s Arms was run by Arnolds Keys on behalf of the Norwich Preservation Trust, which took on the building in 2011, when it undertook a comprehensive restoration project, including completely rethatching the roof.

Paul Watson, vice-chair of the Trust, said, “We had a huge amount of interest in this unique building in the heart of the old city.  It has been very important to find the right people to build on the heritage of what came before, and to keep the Briton’s Arms as both a destination and an important asset for Elm Hill.

“We chose Richard because of his extensive hospitality background, his sustainable business case, and not least because of the passion he demonstrated for the building and its heritage.”

Hiedi Collis from Arnolds Keys said, “The Briton’s Arms is not just one of Norwich’s most iconic historic buildings, it is nationally significant.  We are delighted to have helped the Norwich Preservation Trust find a new tenant who has a real passion for breathing new life into this wonderful old building, and ensuring that it remains an iconic part of Norwich for many years to come.”

Built in 1347, the Briton’s Arms, originally called ‘Ye Goddes House’, was connected to the nearby St Peter Hungate church (built 1254), and is believed to have been a beguinage, housing beguines, or beguines: lay religious women who lived in community without taking vows or retiring from the world.

In 1507 it survived the destruction by fire of much of the historic centre of Norwich, including most of the medieval buildings on Elm Hill.

It was used for a variety of purposes over the centuries, including as a barber surgeon in the 15th century, and in connection with the wool trade in the 17th and 18th century.

It was first recorded as an ale house in 1760 and remained a public house until 1941.  It reopened in 1960 as a coffee shop and restaurant, being taken over by sisters Sue Skipper and Gilly Mixer in 1976.  They announced their intention to retire in 2020.

In 2011, with the ancient fabric of the building becoming increasingly unsound, the Briton’s Arms was put up for auction by Norwich City Council, who had owned the building since 1951.  After a public outcry, the City Council withdrew the property from auction, and offered a lease to the Norwich Preservation Trust, which embarked on an extensive restoration project, with considerable funding from Historic England and The Architectural Heritage Fund.

The building has been used by many filmmakers, including Matthew Vaughn for his 2006 movie Stardust, which had an all-star cast including Robert de Niro, Michelle Pfeiffer, Claire Danes and Sienna Miller.  It was last seen on screen at Christmas 2020 as an integral part of the set for the Netflix Christmas film Jingle Jangle.