About Us | Blog | ESTATE AGENTS OF THE FUTURE? NORTH WALSHAM AND AYLSHAM CHILDREN WIN ‘FOR SALE’ BOARD DESIGN COMPETITION
Tweets by @ArnoldsKeys

ESTATE AGENTS OF THE FUTURE? NORTH WALSHAM AND AYLSHAM CHILDREN WIN ‘FOR SALE’ BOARD DESIGN COMPETITION

A four year-old from North Walsham and a nine year-old from Aylsham have won art hampers for their classmates – as well as having their own artwork displayed in prominent shop windows. 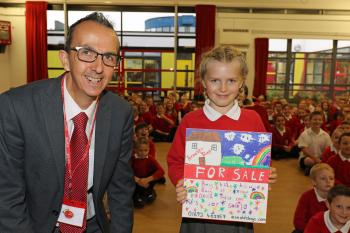 Four year-old Scarlett Wilson from North Walsham Junior School and nine year-old Erin Reeve from Bure Valley School in Aylsham were the winners of a competition run at the Worstead Festival by estate agents Arnolds Keys to design new ‘For Sale’ boards.

Their colourful designs will now de displayed in the windows of the firm’s North Walsham and Aylsham offices respectively, and representatives from Arnolds Keys visited the two schools to present the prizes in front of the pair’s classmates during assembly.

The art hampers contained a huge amount of arts and crafts goodies, including pens, pencils, paper, glitter, and a laminator.

“Dozens of children entered the competition at the Worstead Festival, and the level of creativity was striking,” said Arnolds Keys marketing manager Tanya Chapman.  “Not only did the winners come up with designs which were eye-catching, but they also had some compelling sales messages as well. 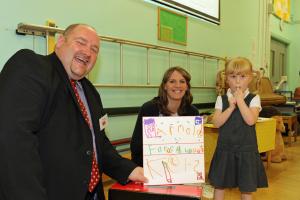 “I think we may be seeing two of the estate agents of the future already!”

Teams from businesses across Norfolk helped to raise more than £1,000 for a local charity at a golf day organised by Norfolk property services firm Arnolds Keys. Read more >

Time to speak up on growth strategy

It was very interesting to attend a workshop of selected planning and development professionals earlier this month, writes Managing Partner Guy Gowing, to discuss the new Joint Core Strategy for... Read more >

We are delighted to announce a joint scheme with Age UK Norfolk supporting older people in Norfolk who are thinking of moving, downsizing or contemplating moving into a retirement home. Read more >