About Us | Blog | DAREDEVIL PAIR RAISE OVER £1,000 IN TWO-MILE-HIGH FREEFALL CHALLENGE
Tweets by @ArnoldsKeys 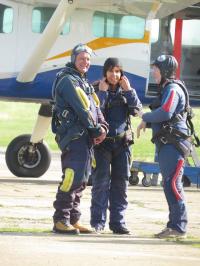 We are hugely proud of two members of our Sheringham branch who have raised over £1,000 for our charity of the year after jumping out of a plane flying at an altitude of two miles.

Louise Hillman, Manager of Keys Holidays, and Allan Saunders, Residential Manager at Arnolds Keys' office in the town, took on the daredevil challenge to raise money for Age UK Norfolk which is celebrating its 70th anniversary this year.

The pair leapt out of the plane over Ellough airfield near Beccles last month strapped to experienced parachutists, freefalling at speeds of up to 120mph for 5,000 feet in about 40 seconds, before gliding serenely back to earth by parachute.

“It was nerve-wracking and exhilarating at the same time,” said Louise Hillman.  "We both wanted to challenge ourselves to do something outside of our comfort zone to help raise money for this great charity.”

The pair set themselves an ambitious target of raising £1,000 in sponsorship and donations from the adrenaline-charged feat, and they have now passed that target thanks to the generosity of colleagues, clients and supporters who have donated online and in the Arnolds Keys office in Sheringham.

Anyone who wants to add to the total can do so by donating online at www.justgiving.com/fundraising/ArnoldsKeysAgeUkNorfolk, or by popping into Arnolds Keys' Sheringham office on Station Road in the town.

For many small-scale property investors, long-term residential buy-to-let has been seen as the default option for some time. Read more >

Two of our staff are set to jump out a plane later this month – all to raise money for charity. Read more >

A STRONG INDICATOR FOR OPTIMISM

We keep hearing mixed messages about the performance of the economy, with inflation unexpectedly down this month, talk of uncertainty over Brexit hitting business confidence, and consumer spending slowing –... Read more >

A Boom in City Living

Lots of us have a romantic notion of what we want our home to look like. Read more >