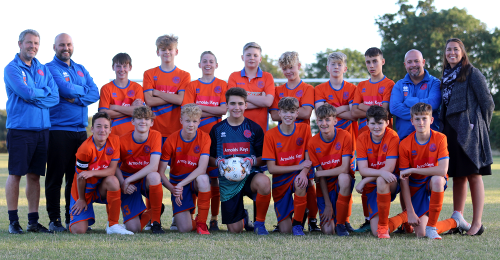 A newly-promoted Norfolk Under 15s football team has a new name on its shirts for the new season, after Arnolds Keys stepped in to become the first team’s kit sponsor.

Announcing the sponsorship, Katie Mountain of Arnolds Keys, which has an office on the Aylsham Market Place, said, “It is great to support a successful local youth football team, especially as two of the team members’ mums work at Arnolds Keys, including myself. We are delighted to be supporting an enthusiastic and dedicated group of youngsters, and helping them build on their success last season.”

The Aylsham Under 15s team is coached by joint managers Ben Adams, Dan Cater and Steve Draper.  Mr Draper said, “It is very motivating for the young people in the team when a local business steps in to support them.  Sport is such a good way for young people to stay fit, learn the importance of teamwork, and build their confidence.”

AFC Aylsham U15s, who play at the Youngs Park football centre in the town, were U14s League Two champions last season, which means they were promoted to the U15s Championship for this season.

Retail has once again been making the news in recent weeks – and despite what some would have you believe, the stories have not all been doom and gloom.  In Norwich at least, there are some bright spots as retailers and landlords alike adjust to the new retail landscape and introduce some innovative thinking to tackle the challenges of online shopping.

As the temperatures dip, it’s a good time for landlords to remind themselves of their obligations about gas safety. Read more >

The heartbeat of the rural community continues…

Agricultural shows are woven into the fabric of our rural communities. With the steady diversification of these shows over time, they now attract people from all walks of life, not... Read more >

At this time of year, young people are finding out their exam results and pondering what they do next. Read more >