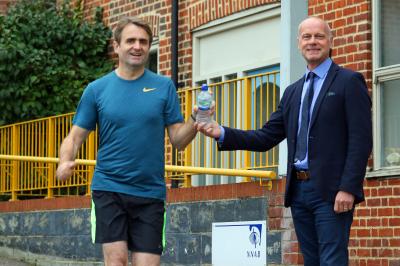 Guy Gowing (our Managing Partner) will be heading to the Big Apple to tackle his first marathon at the age of 50 – in aid of Norfolk’s sight loss charity (NNAB), of which he is a Trustee.

Guy decided to mark his half-century by taking on the New York Marathon, and will line up with over 50,000 other runners on Sunday 5 November on Statten Island, before heading for the finish line just over 26 miles away in Manhattan’s Central Park.

“Being about to reach 50 years of age has made me realise that the thought of ‘having a marathon in me somewhere’ meant it was now or never,” said Mr Gowing.  “So I decided to tackle the New York Marathon as my first – and only – attempt. I have been a Trustee of the Norfolk & Norwich Association for the Blind for some years, and I’m delighted to be running to raise money for this great charity, as well as the New York Marathon’s own good cause, NYRR Team for Kids, which supports deprived children in the city. Training is going well, I have already completed two half marathons, so I hope that I will be ready to complete the marathon itself next month, in a respectable time.”

Guy is aiming to raise a total of £5,000 through his exploits.  Anyone wanting to sponsor him on his marathon challenge can do so by visiting http://uk.virginmoneygiving.com/GuyGowing.

The publication of a new valuation ‘Red Book’ – more properly titled ‘RICS Valuation, Global Standards 2017’ – may at first glance be of interest only to surveyors and other... Read more >

A new drive-through Starbucks is set to open on the southbound A11 near Attleborough, following a major leasehold deal negotiated by Arnolds Keys. Read more >

GET THAT SALE WRAPPED UP FOR CHRISTMAS

Despite the fact that it signals the end of summer, September is very much a month of renewal. Read more >

A student on the ground-breaking Property and Customer Service course at City College Norwich has carried off the prestigious Business and Retail Achievement Award at this year’s City College Further... Read more >