About Us | Blog | LANDMARK 900 YEAR-OLD PRIORY IN GREAT YARMOUTH ‘WILL REMAIN A COMMUNITY RESOURCE’, PROMISES NEW OWNER
Tweets by @ArnoldsKeys 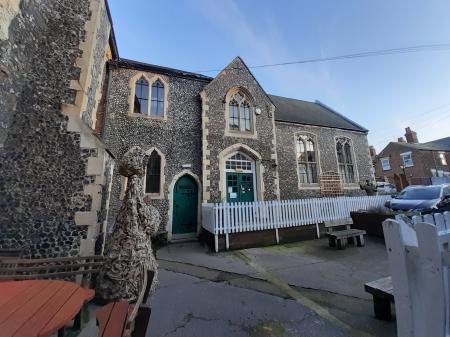 A 900 year-old landmark Grade 1 listed building in Great Yarmouth which was put up for sale last year has been bought by a businessman who grew up in Great Yarmouth – and he is promising that it will remain a community resource.

The 12th century Great Yarmouth Priory was founded by Bishop Herbert de Losinga in 1101, and was most recently used as The Priory Centre. The building was put on the market by property agents Arnolds Keys in September following the collapse of the Great Yarmouth Community Trust at the end of last year.

Now it has been announced that it has been bought by Rob Haslam, an architect and strategic business consultant who grew up in the town, and who also bought the adjacent vicarage in April.

Mr Haslam is planning to offer the Priory’s 2,500 sq ft Great Hall for wedding receptions and other community events, with office space in the building being made available for local start-up crafts and artisan businesses. He is also planning to open a community café in the vicarage next door.

Mr Haslam, who is now based in Essex, says that the purchase is part of his desire to give something back to the town where he spent his formative years.

“I was so lucky growing up in Yarmouth,” he said. “I don’t think I realised until much later just how much I gained from my time in the town.

“There has been a lot of bad press about Yarmouth, and it’s so wrong. My aim is to make Great Yarmouth the most sought-after seaside resort in the UK, within five years. And a part of that is getting these historic old buildings back into use for the town.”

Mr Haslam grew up in Great Yarmouth, but left 35 years ago to go to London to study Architecture. He has since built up a successful business based in Essex, which has worked with a number of high-profile national clients including the BBC, Legoland Windsor, Tesco and TUI.

“We are delighted that this landmark historic building right in the centre of Great Yarmouth has been successfully sold, to someone who will ensure the building continues to play a useful role in the public life of the town,” said Guy Gowing, managing partner at Arnolds Keys.

Founded as a Benedictine priory in 1101, Great Yarmouth Priory was enlarged in 1260 and the hall was rebuilt in 1300. It was home to 15 monks until it was dissolved in 1539, and played host to King Richard II in 1382. It was significantly refurbished in 1978, and again at the turn of the millennium.

SCALING THE SUMMIT OF PUBLICITY

Can you imagine the deep green envy on the faces of Norfolk’s tourism chiefs as they watched Cornwall getting absolutely masses of free worldwide TV exposure last weekend, with the... Read more >

A combine harvester, seven tractors, vintage lorries and a huge range of agricultural machinery is included in the sale, which follows the decision of the Buxton family to step back... Read more >

The days of tired, mouldy bathrooms in lettings properties should be long behind us. It’s one of the main things which put off potential tenants, especially the kind of aspirational,... Read more >

SEEKING A TRADE DEAL IN A LAND DOWN UNDER

The Norfolk MP and Secretary of State for International Trade, Liz Truss, looks set to sign the first post-Brexit trade deal; a deal which doesn’t simply replicate that which the... Read more >