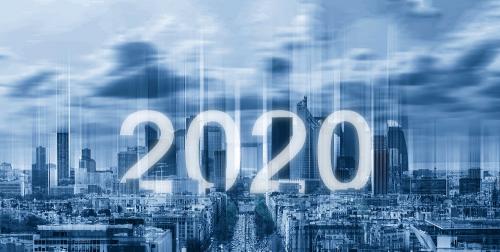 It’s crystal ball time again, as we start the new year.  How will the next 12 months pan out for investors in commercial property?  To answer that question requires an in-depth knowledge of the market – and some 2020 Vision.

The result of the General Election, returning a parliament with a clear majority, will unlock the political logjam which has resulted in an excuse for inactivity due over the past two years.

This will enable the economy to excel and shine as it has been threatening to do throughout that period.  We are at the right point in the economic cycle to stimulate growth, the pound is at pretty much an ideal level, and the economy should be flying.  Whatever your political persuasion, it is difficult not to welcome the certainty that a clear mandate to govern result brings.

One result of two years of uncertainty is that there is a huge amount of cash in the economy looking for a home, as investors have been sitting on their hands to an extent, waiting to find out what is going to happen.  Expect that cash to be splashed on freehold commercial property over the next 12 months, driving up values and resulting in the best properties being snapped up.

This will be helped by continued low interest rates, making other forms of investment relatively unattractive.  We may see rates start to creep up towards the end of 2020 but is likely to be just that – a slow creep, and only then if consumer spending starts to get out of control.

The other important economic indicator, inflation, is well under control, and I can’t see it rising above its target 2.5% at all in the year.

One caveat to all of this: if the new Government keeps its manifesto promises, there will be an increasing conflict between keeping the economy moving and long-term economic prudence.  But it is difficult to see this having an appreciable effect in 2020.

Although not strictly relevant to commercial property investment, residential house prices do have a bearing, both for confidence reasons and because some investors will transfer between the two sectors.  For the record, my residential colleagues expect house prices to rise by an eminently sustainable three to five per cent during the year.

There is no reason to think that the High Street’s woes won’t continue into 2020, but it’s not a universally pessimistic picture.  At last the retail sector is starting to adapt to the new reality, and landlords are widening their offer, becoming more flexible in the type of business they are prepared to accommodate.  2020 will be the year in which we find out if this strategy is working.

One thing is sure, though: Norwich’s prime city centre pitch will continue to thrive, as will the independent Norwich Lanes.  We have learnt that to be successful, a retail area has to be a destination in its own right, where the variety of what is on offer is difficult to replicate on the internet.

Outlying city retail parades on busy main roads will continue to prosper, as will those market towns which have made the effort to preserve a good variety of destination retail outlets – places such as Aylsham, Holt and Sheringham.

But there are silver linings to every cloud: when demand from large multiples declines, it opens the way for new, independent start-ups

It’s true that rents are under pressure in the retail sector, but this is reflected in some very attractive freehold prices, which mean percentage yields can be very healthy indeed.  So for investors prepared to take the time and effort to find the right property in the right location, there is still value to be had in retail property.

Buoyant demand for top-quality office accommodation, coupled with a continuing shortage of such Grade A buildings, means that the year will see more upward pressure on rents.  Top-end rents are already breaching £17 per square foot; expect that to break through the £18.50 mark by the end of the year.

Unsurprisingly with such strong rental yields to be had, there is insatiable demand for freeholds by investors, both because of the volume of cash looking for a home, and due to low interest rates making financing such investments good value.

Because of the lack of Grade A stock, secondary quality offices are also doing well, particularly where landlords are being savvy and undertaking refurbishments.  The mismatch between demand and supply is inevitably meaning some occupiers are looking in this space.

Despite all this, we haven’t yet seen any appreciable rise in speculative office development, perhaps because of the political uncertainty over the pas couple of years.  I predict that we may finally start to see investors embarking on this kind of activity in the second half of 2020.

2019 was a boom year for the industrial sector, and there is no reason to think that this won’t continue into 2020.  There has been strong rental growth, with rents of £8 per square foot commonplace – expect these to rise by as much as ten per cent during the coming year.

The result of all this is an exceptional demand for freehold investments.  One building we marketed in Vulcan Road received five bids in the first week of marketing, and that kind of competition is not unusual.

Hot locations in 2020 will be around the north of the city, which has been opened up by the Broadland Northway.  Rackheath has been, and will continue to be, a big winner, as will Aylsahm and North Walsham.  Alongside this, Great Yarmouth’s position in the offshore energy sector is leading to strong demand.

Strongest demand will be for buildings between 3,000 and 6,000 square feet, a reflection of the boom in servicing and engineering companies, rather than all-out manufacturing, which tends to require much bigger spaces.  Expect to see more speculative development of such units in 2020.

Our Operations Partner Jan Hÿtch talks us through Christmas in different properties... I’m not going to lie - having earlier this year moved to a modern riverside townhouse in... Read more >

MASTERING THE TRANSITION FROM EDUCATION TO THE WORKPLACE

All over Norfolk, 2019 graduates are coming to the end of their first few months of life in the actual workplace. Read more >

Are you taking enough steps to reduce your carbon footprint?

At the start of November DEFRA announced a new £500 million Woodland Carbon Guarantee scheme aimed at boosting tree-planting rates and helping to tackle climate change. The scheme promises long-term financial income in return for carbon sequestration. Farmers will be able to “sell” carbon credits to the government for a guaranteed price every five or ten years up to 2055/56

Make The Most Of That Viewing

So you have your property on the market, and your estate agent is hard at work marketing it. Read more >